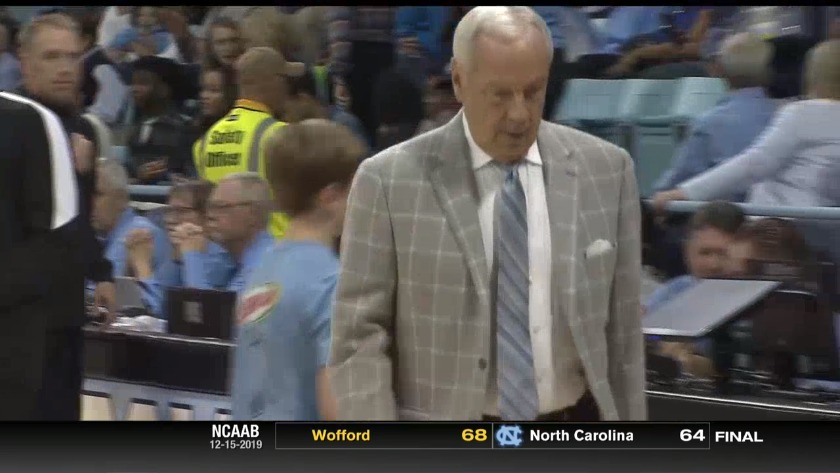 CHAPEL HILL, N.C. (AP) — Wofford traveled to Chapel Hill and shocked a ranked North Carolina team again, getting 19 points from Trevor Stumpe and riding a 16-0 run in the second half to a 68-64 win over the 17th-ranked Tar Heels on Sunday.

Storm Murphy added 15 points and Messiah Jones had 13 points for the Terriers (7-4), who went on the road to beat North Carolina for the second time in three years.

Wofford, a 12-point underdog, made four 3-pointers during its decisive spurt, a 6-minute stretch in which the Tar Heels missed 10 consecutive shots.

Garrison Brooks had 17 points and 12 rebounds for North Carolina in its first regular-season game at Carmichael Arena since Jan. 4, 1986.

Brandon Robinson added a career-high 16 points for the Tar Heels, who lost their third straight game. They cut Wofford’s lead to 65-61 with 51.5 seconds remaining but got no closer.

Wofford: The Terriers took advantage of their opportunity to play North Carolina without Anthony, its best player and leading scorer. In doing so, they showed why they’re dangerous. Wofford scrapped against the taller Tar Heels inside and stretched out North Carolina’s defense on the perimeter to generate plenty of open 3-point shots.

North Carolina: The Tar Heels were struggling on offense when they had Anthony, albeit against some of the nation’s best defenses. They aren’t likely to be successful this season against anyone if they have to play long stretches without him. That became obvious in the second half, when they couldn’t generate offense without his ability to drive and draw defenders.

Wofford: The Terriers play the second of four consecutive road games, staying on Tobacco Road with a trip to No. 7 Duke.

North Carolina: The Tar Heels’ grueling stretch continues with a cross-country trip. They play at No. 6 Gonzaga on Wednesday night, their fifth game in the last six against an opponent currently ranked in the top 10.