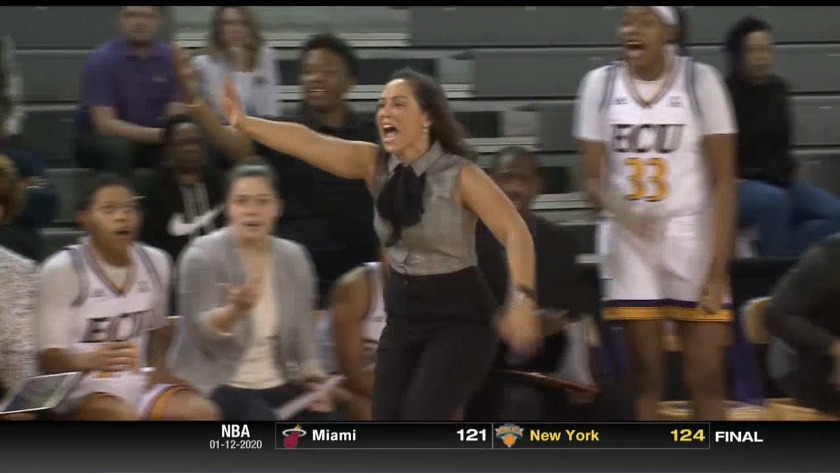 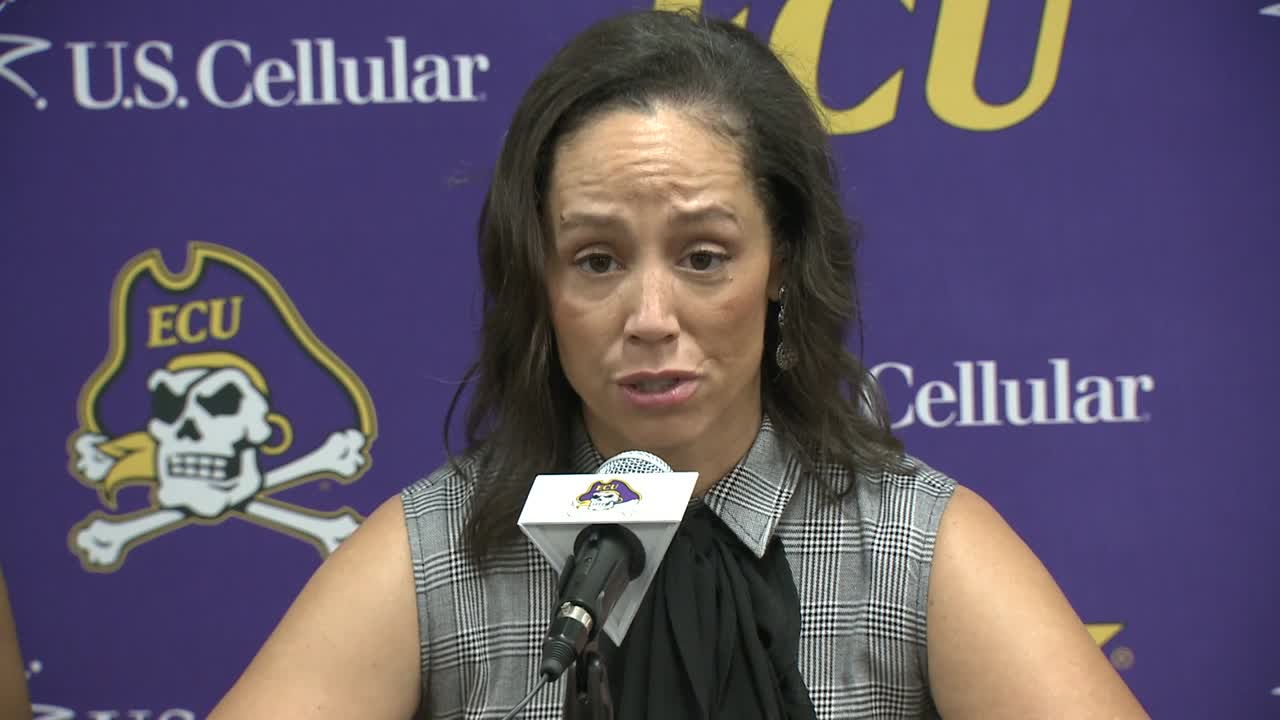 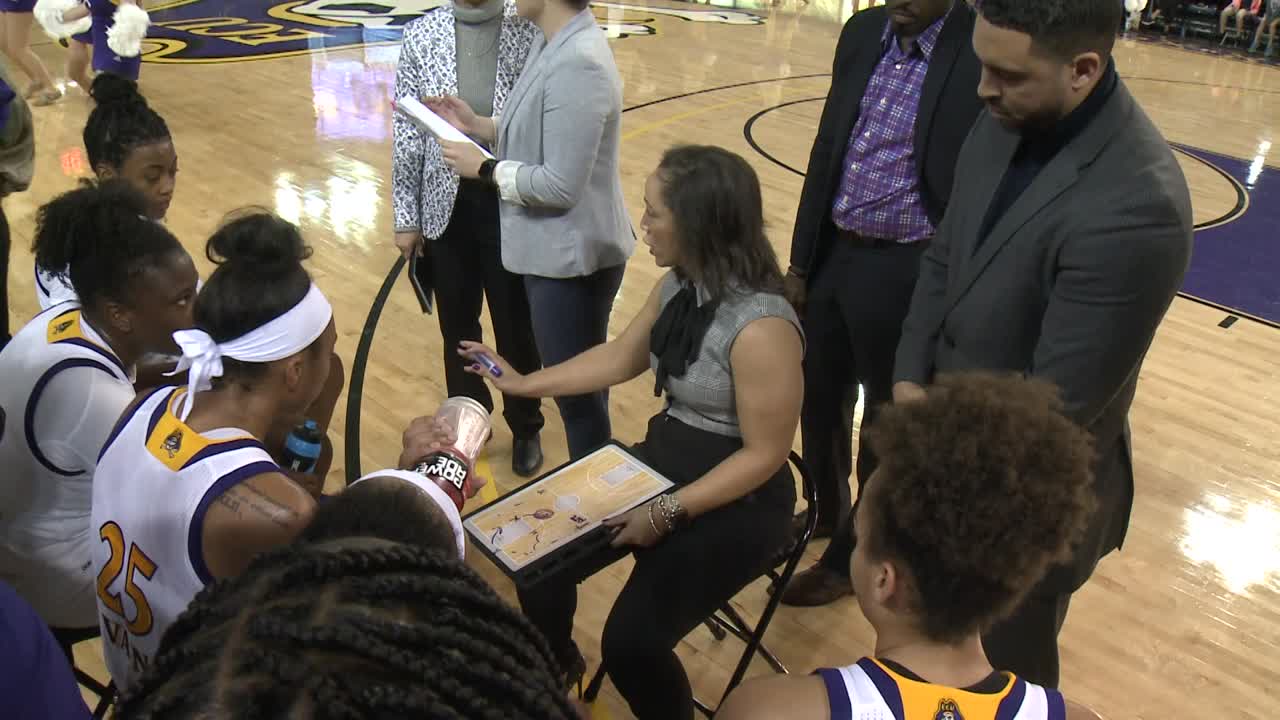 ECU (3-13, 0-3 AAC) was led in scoring by freshman guard Katerina Tsineke who finished with a career-high 15 points and a trio of three-pointers. Lashonda Monk was also in double-figures, scoring 12 points to go with a team-high seven rebounds and six steals. The Pirates forced 27 Wichita State turnovers and had 18 steals.

Trajata Colbert had a team-high 12 points for Wichita State (9-7, 1-2 AAC) while Mariah McCully finished with 11. Asia Henderson had nine rebounds to lead the Shockers as Wichita State outrebounding the Pirates 38-30.

Throughout the season, ECU has struggled in the third quarter, but on Sunday the Pirates used a big third period to get back into the game. Back-to-back three-pointers from Monk and Tsineke quickly cut the Wichita State halftime lead from 28-20 to 28-26. That was the start of a 14-3 run that culminated in another Tsineke three-pointer to give ECU a 34-31 lead. Tsineke added another triple near the end of the quarter giving her 10 points in the quarter. In all, ECU outscored Wichita State 20-12 in the third and the game was tied 40-40 heading into the fourth.

The two teams went back and forth in the first few minutes of the final frame. A free throw by Tsineke gave ECU a 47-45 lead with 6:40 to play. Unfortunately for the Pirates, the offense went cold at the wrong time. ECU could only muster four points the rest of the way while the Shockers got to the free throw line to push ahead. Wichita State finished the game on a 15-4 run, 10 of which came at the charity stripe. That helped the Shockers pull away for the win.

ECU will have a week off before heading on a two-game road trip. The Pirates will be at Houston next Sunday afternoon before taking on Tulsa on Tuesday evening.

-Tsineke becomes the third ECU freshman to score at least 15 points in a game this season, joining Taniyah Thompson and Ryann Evans as well as becoming the third Pirate to hit at least three triples in a game, as Monk and Thompson have each done it three times.

-The 40 free throw attempts for Wichita State are the most by an ECU opponent this season.

-Thompson tied her career-high with four steals. ECU missed its season high in steals by one, having racked up 19 takeaways at Liberty.

On the difference in the number of fouls and free throw attempts: “I think if you go back and look at every game, we’re probably fouling more than the other team and that’s going to happen because of the way we play defense. We’re extremely aggressive and I’m okay with the aggressive fouls, diving on the floor or closing up our traps, but the fouls that we’re making where we’re just kind of reaching in there at the last minute on put backs and giving up and 1’s, that has to stop.”

On whether fatigue played a role in the fourth quarter: “I thought we just lost our composure a little bit and started making some really bad turnovers, which led to offense for them.”

On the ability to force turnovers: ““When you can turn people over 27 times and 18 of those are steals, which are live ball turnovers, that’s a big part of our offense.”

On having to step up due to foul trouble: “I just tried to step up and help my teammates. Most of our teammates had like four fouls so somebody has to take the point.”

On her confidence growing after making a three-pointer: “Once I made the first one, I was sure that I was going to make the second one and the third one. I believed it.”