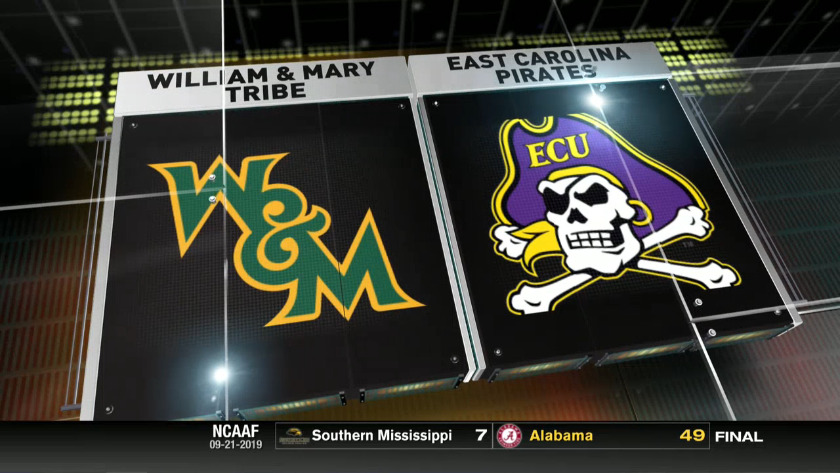 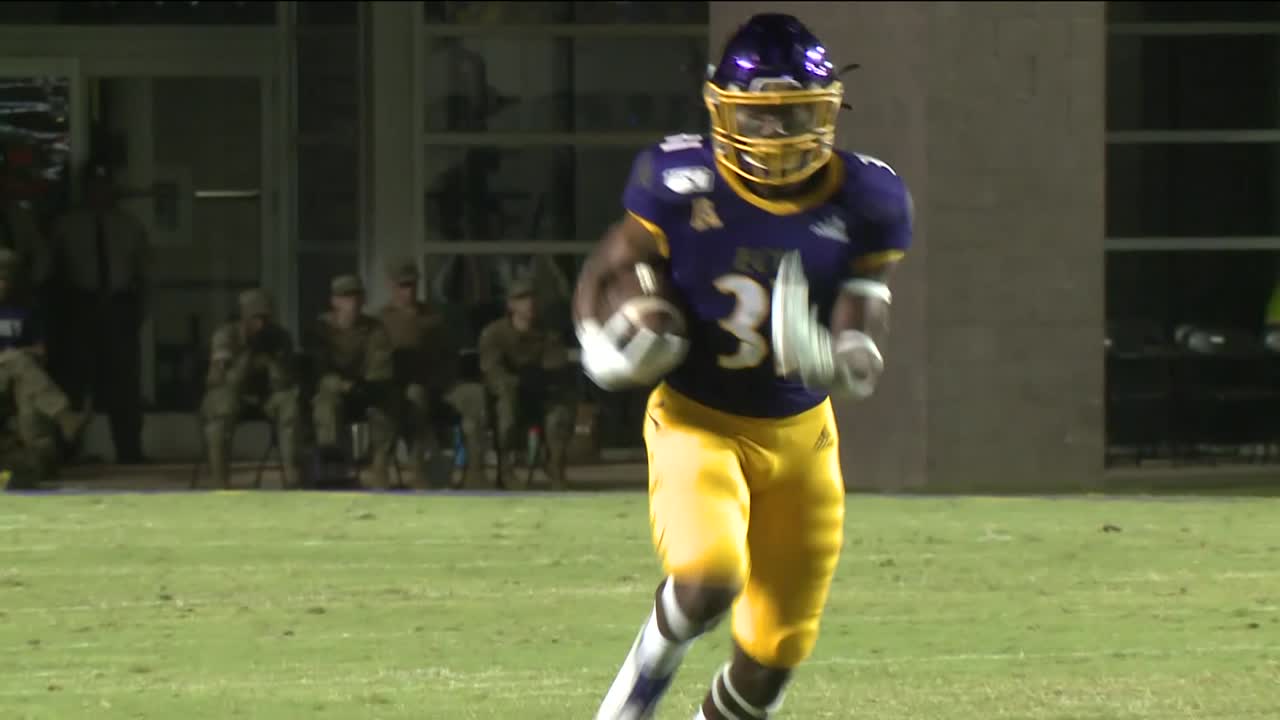 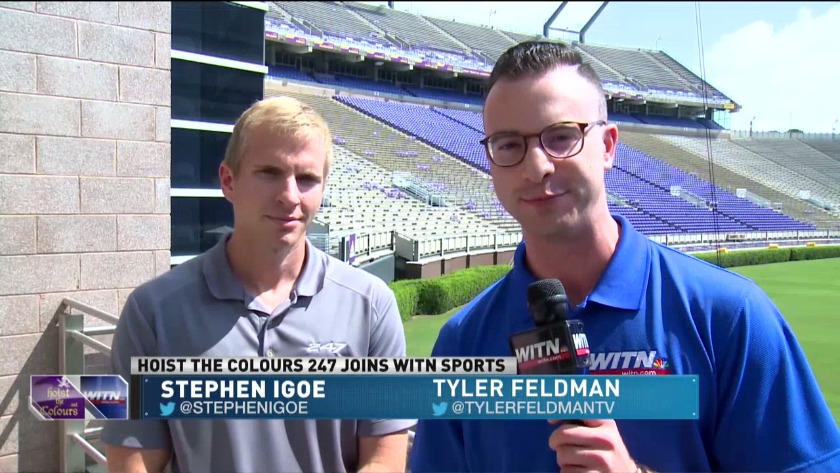 GREENVILLE, N.C. (ECU) – First-year East Carolina football coach Mike Houston likely hasn't smiled this much in months. That is the product of winning and any win is worth savoring.

Behind a stout defense, an unexpected spark from a couple of backup running backs and the dependable foot of Jake Verity, the Pirates evened their record on the still-young 2019 season with a 19-7 victory over FCS visitor William & Mary on Saturday night. For Houston, whose program is coming off four consecutive losing seasons, the grind-it-out win brought a sense of satisfaction, especially after last week's humbling 42-10 loss at Navy.

"This past week's been rough," Houston said. "It's been a long time since I've had a weekend like last weekend. Our coaches, they worked very, very hard this week and to have a night like tonight was certainly rewarding. At least for a night you can take a big, deep breath."

Having his family, including his mom, in the crowd of 38,094 at Dowdy-Ficklen Stadium also made his second home win special.

"Mom was here tonight with my wife and the kids," Houston said. "It's the first game she's seen since 2012. We got a win that night, too, so we may need to get her back a little more often. To have her here for the game and see us play that way and have that kind of environment, you always want family around for that kind of stuff. That made it special also."

How the Pirates won also contributed to Houston's post-game mood. Despite a bevy of mistakes that included penalties (nine for 83 yards) and missed opportunities, the Pirates showed balance on offense and muscled up on defense, including three fourth-down stands to thwart Tribe threats.

ECU finished with 480 yards, grinding out 270 on the ground with six different ball carriers combining for 48 attempts. Quarterback Holton Ahlers added 210 yards through the air, completing 20 of 34 passes.

William & Mary, which started freshman Hollis Mathis at quarterback before turning to Kilton Anderson after the first three series, was limited to 260 yards – 122 on the ground and 138 through the air. The Tribe trailed just 10-7 at the half but never seriously threatened to creep closer as Verity and ECU's ground game methodically salted the game away.

"We've got four million mistakes we've got to get corrected, but the way the kids competed in the second half, the way they fought to overcome some adversity, the way we played defense, the way we ran the football in the fourth quarter, that's what you've got to do to win ballgames," Houston said.

Sophomore Trace Christian and redshirt freshman Tay Williams spearheaded that effort, combining for all of their combined 163 yards after halftime. Christian had a career-high 14 carries and finished with 91 yards – just 11 shy of his top performance against UConn last year. Williams ripped off 72 yards on just five carries, highlighted by a 43-yard dash on his first career carry.

The duo even led the team in the fight song after the game.

"Back in the spring they were buried under the doghouse," Houston said. "They weren't even in the doghouse. They were a step away from being in big trouble. But you know what they have done. They have corrected their mistakes, they've worked very, very hard.

"Both of them were on the scout team most of the year," Houston said. "The past couple of weeks, their effort has got them platooning on offense. But this week they had great weeks of practice and (running backs) Coach (De'Rail) Sims and I talked all week that we were going to be prepared to use both of them tonight."

Ahlers provided the early jolt for the Pirates, who opted to take the opening kickoff after winning the coin toss. The sophomore left-hander connected on 4 of 5 passes for 63 yards, capped off by a 20-yard scoring toss to Anthony Watley. The senior tight end adjusted to a tipped ball that floated behind him and cradled it before waltzing into the end zone.

A quick 7-0 lead was just what Houston and an excited home crowd wanted -- and needed.

ECU couldn't build on the quick-strike momentum and sputtered much of the remainder of the half, giving up a couple of drive-killing sacks and missing on a 55-yard field attempt to end the half. The Pirates' only other points came on Verity's 31-yard boot that broke a 7-7 tie.

ECU's defense came up with two crucial fourth-down stops in the opening half, but a roughing-the-passer penalty on a third down led directly to what would be the Tribe's only touchdown. The Tribe tied it with 9:36 left in the second quarter on a 20-yard jaunt off the right side by Tyler Crist one play after a low hit on Anderson just after he released a pass drew a penalty flag.

Gerard Stringer came up with one of ECU's fourth-down stops wrapped up Owen Wright for no gain on fourth-and-one at the 27. That came one play after Mathis fired a 19-yard strike to Tyler Klaus on third-and-20.

William & Mary misfired again on fourth-and-three from the ECU 34 when Anderson overthrew an open receiver. The Pirates made a final defensive statement in fourth quarter when Chance Purvis torpedoed in to stop a fourth-and-one try from the 41.

"We knew they were going to go for it in certain situations, so we worked several calls right there in those situations," Houston said. "Boy that last one was huge. That last one was the one, to not only get the stop but to get it with authority. That probably put the game away right there."

Ahlers took a knee with the Pirates at the one to end the game.

"Our kids came through in the fourth quarter and put a good opponent away at home," Houston said.
"That's what you've got to do. You've got to win those games at home. And what a great night. What a phenomenal crowd we had. They were electric all night. The stadium was rocking. What a great finish."

And a reason to smile.