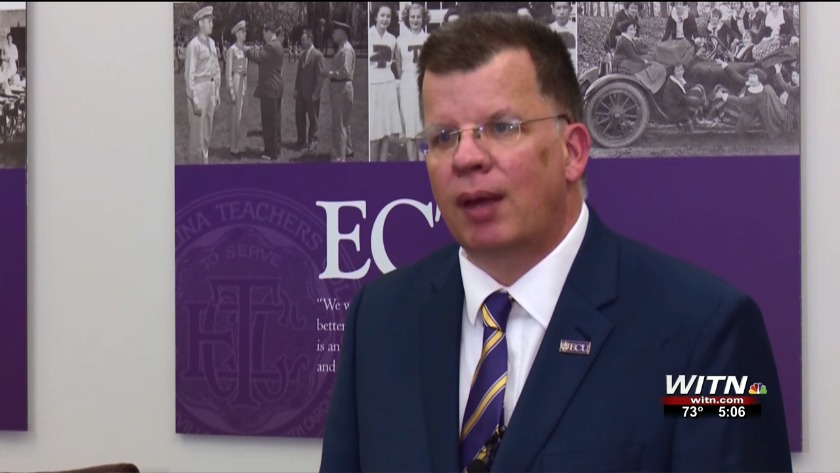 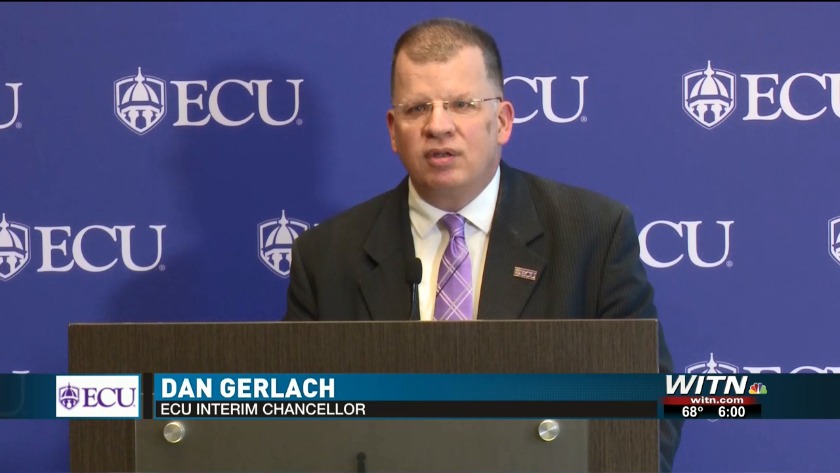 GREENVILLE, NC (WITN) - A new chancellor officially is on the job at ECU today.

Dan Gerlach will serve as the interim chancellor for at least the next two years.

He replaces chancellor Cecil Staton who was forced out after three years on the job.

Gerlach says, "Of all the campuses in the system and all the colleges in the state I have a great heart for ECU."

Gerlach previously served as the president of the Golden Leaf Foundation for 10 years. The foundation focuses on the development of economic opportunities in rural communities.

One of his focuses is to improve ECU's enrollment.

Gerlach says, "Our enrollment's a little bit down--mainly because we just graduated a record amount of people just on Friday night, but we're looking to build that because we have room here, we have capacity here; we have a lot of talent and hard-working faculty and staff ready to go."`

And when asked if he would accept the position permanently, Gerlach said, "Yes, I think anything is possible."

It's unclear if Gerlach will move into the chancellor's home on Star Hill Farm Road or use a housing allowance.

More details have been released about the hiring of East Carolina University's interim chancellor.

Dan Gerlach was named to the new job on Tuesday by UNC Interim President Bill Roper.

In a letter released today to WITN, UNC said Gerlach would be employed by the university system "for at least 24 months".

It says after a permanent chancellor is named, Roper may offer Gerlach a job as a special advisor to the president, or a special assignment to a UNC System school.

The interim chancellor, who begins May 6th, will be paid $350,000 annually, receive the use of a car or a car allowance "as well as either the use of the chancellor's residence or a housing allowance at the discretion of the president."

The letter also says Gerlach will be an "at-will" employee and can be fired at any time for any reason by Roper.

Gerlach will replace Cecil Staton at ECU, who was forced out last month. Staton's last day will be May 3rd.

Roper, in his letter, thanked Gerlach for serving ECU "during this critical time."

The man who was appointed Tuesday as interim chancellor at East Carolina University has officially resigned from his current job.

Dan Gerlach will become interim chancellor on May 6th. Today he told the Golden Leaf Foundation board that he will serve as their president until May 3rd.

During his 10 year tenure as Golden Leaf president, the foundation has grown its endowment from $650 million to $1.1 billion and awarded over $550 million in grants.

Gerlach will replace Cecil Staton at ECU who announced last month he was leaving after less than three years on the job.

The new interim chancellor will be paid $350,000 per year, according to a UNC System spokesman. At Golden Leaf, Gerlach made just under $200,000 annually.

An ECU spokeswoman said it hasn't been determined yet if Gerlach will move into the chancellor's new home on Star Hill Farm Road.

The president of the Golden Leaf Foundation was named interim chancellor at East Carolina University this afternoon.

UNC Interim President Bill Roper spoke to the media at 4:15 p.m. at the new student center.

Roper named Dan Gerlach as interim head of the university. He will start on May 6th.

“ECU provides more opportunity for rural North Carolinians than any other institution, and I look forward to working with the entire ECU community to meet the needs of our students, their families, and the communities that look to this great university for inspiration and leadership," said Gerlach. "It’s a great day to join Pirate Nation.”

Since 2008, Gerlach has been president of the Golden Leaf Foundation and before that was a senior budget advisor for then-Gov. Mike Easley.

When asked about the lack of his academia experience, Gerlach admits he has much to learn but notes that he has a lot of experience in making both managerial and financial decisions.

Roper added there is a tradition in the country that there have been fine university leaders, including himself, who haven't spent their lifetime in academics.

“I know Dan will work in lock-step with the strong leadership team at East Carolina, which includes the ECU Board of Trustees, the UNC Board of Governors, faculty, staff and students, alumni and the entire East Carolina community. With his exemplary record of service and leadership, he is the ideal candidate to lead ECU going forward,” Roper said.

Cecil Stanton is stepping down as chancellor after graduation on May 3rd, a job he has held since 2016.

Roper said they will now conduct a full search for a permanent replacement for Staton.

Gerlach, who is leaving his position at Golden Leaf, said he would consider applying for that position.