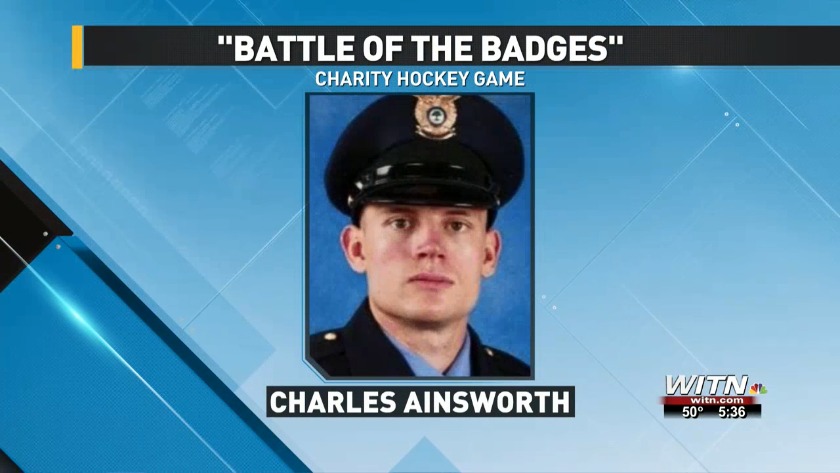 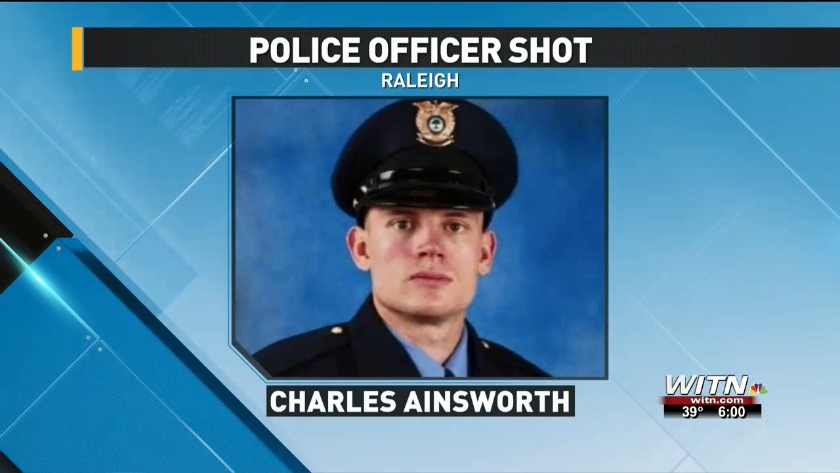 RALEIGH, N.C. (WITN) -- A police officer is back on the job one year after being shot.

Our sister station in Raleigh, WRAL, ​says Raleigh police officer Charles Ainsworth returned to work this week. He was shot in the neck exactly one year ago while on the job.

Authorities say Ainsworth was following up on a report about a car stolen at gunpoint when he was shot.

Authorities say the accused gunman, Cedric Kearney, broke into a home that night and stole guns, one of which he used in the shooting.

Ainsworth was born and raised in Jacksonville and graduated from Swansboro High School in 2010, according to the Raleigh police website.

The Battle of the Badges charity hockey game will feature a team of Raleigh police officers coached by Hurricanes Defenseman Jaccob Slavin and a group of local firefighters coached by former Hurricanes forward Erik Cole.

The event is in honor of police officer Charles Ainsworth, who is still recovering in the hospital after he was shot in the neck while following up on a report of a car stolen at gunpoint in January.

The event is open to the public and no tickets are required, although cash donations will be accepted at the door. all proceeds from the event will go to the Ainsworth family.

The game begins at 7 p.m.at PNC Arena in Raleigh.


PREVIOUS STORY
Family members of the Raleigh police officer who was shot in the neck say that he is now in stable condition.

Officer Charles Ainsworth, who was born and raised in Onslow County, is recovering at WakeMed.

He was following up on a report of a car stolen at gunpoint on January 9 when he was shot several times, including in the neck.

The family has asked for privacy since the shooting, but released a statement Wednesday saying that he is stable and beginning the road to recovery. They thanked everyone for their continued support.

Cedric Kearney, 24, is charged with attempted murder, two counts of assault on a law enforcement officer with a firearm and possession of a stolen firearm in Ainsworth's shooting.


PREVIOUS STORY
Police have released an initial report on the shooting of an officer.

Raleigh police say Officer Charles Ainsworth was shot several times within close range as he and officer B.A. Halpin were approaching two men they say were trying to break into a car

The prelimiary report says one of the suspects, Cedric Kearney, fired a gun at Officer Ainsworth. That's when Officer Halpin returned fire, but he didn't hit Kearney, who fled on foot.

Officer Ainsworth was taken to WakeMed and has undergone at least one surgery. There is no further update on his conditon.

Kearney was later found in a storage shed outside of a house about half a mile from the location of the shooting. He's charged with attempted murder and is being held under a more than $2-million bond.

Antonio Fletcher has also been charged in connection to the case.

Officer Halpin has been placed on administrative duty until an investigation is complete.

He's accused of repeatedly shooting Officer C.D. Ainsworth later that night while the officer investigated a suspicious vehicle, which police say was stolen by Kearney last week. Ainsworth is recovering from surgery. The severity of his wounds is unclear.

Kearney appeared in court Thursday on charges including attempted murder. Another man arrested in the case, 21-year-old Antonio Dequan Fletcher, is charged with possessing a stolen firearm. It's unclear if they have lawyers.

Information from: The News & Observer, http://www.newsobserver.com

Ainsworth was born and raised in Jacksonville, according to the Raleigh police website.

The officer graduated in 2010 from Swansboro High School and went onto North Carolina State University where he received a degree in psychology.

Onslow County Sheriff Hans Miller says, "Our local officer, even though he worked for Raleigh Police Department, he was one of our own. He was an Onslow County boy who got his education here, so that kind of hits home and makes it very personal."

Swansboro Police Chief Ken Jackson says, "Good young man, very dedicated to what he was doing. Had a good heartfelt passion for what he was doing. You never know when it's going to happen. Our hearts, prayers, they go out to that family, especially the victim himself.​"

Officer Ainsworth was shot as soon as he got out of his patrol car while responding to a call about a suspicious vehicle Wednesday night.

He was taken to a local hospital and underwent immediate surgery.

Officer Ainsworth was shot four times, including once in the neck.

Raleigh police say he's out of surgery, but there's been no other update on his current condition.

Antonio Fletcher, 21, is charged with possession of a stolen firearm.

Raleigh Police have identified two men charged in connection to the Wednesday night shooting of a police officer.

Antonio Fletcher, 21, is charged with Possession of a Stolen Firearm.

Raleigh Police Chief Cassandra Deck-Brown said Thursday morning, "The officer who was shot in this incident is out of surgery. The Raleigh Police Department is grateful for all of the support from various law enforcement agencies, the surgeons and medical staff and the community. We ask that everyone continue to pray for the officer and his family."

Police say an officer was shot four times, including once in the neck, while trying to apprehend a suspect Wednesday night.

The officer was in surgery overnight and the department announced he was out of surgery by 2:30am Thursday.

There's no further information the officer's condition at this time.

Two suspects are in custody after a Raleigh police officer was shot Wednesday night.

Authorities say the officer was investigating a report of a suspicious vehicle that was believed to have been involved in a carjacking.

The officer exited the patrol car and was almost immediately shot, sustaining multiple gunshot wounds, including one to the neck, authorities said.

The wounded officer was placed in a patrol car and, on the way to a nearby hospital, was transferred to an ambulance.

The officer was in surgery Wednesday night.

A Raleigh police officer was rushed to the hospital Wednesday night after being shot in the neck.

The search for a suspect is ongoing.

WRAL reports the shooting happened at about 8 p.m. on Teakwood Place near Deboy Street.

The wounded officer was taken to WakeMed in another officer's patrol car, authorities said.

Authorities did not release any information about the officer’s condition or what led to the shooting.