Jurors find Whitford guilty of killing her husband; gets 20-25 years 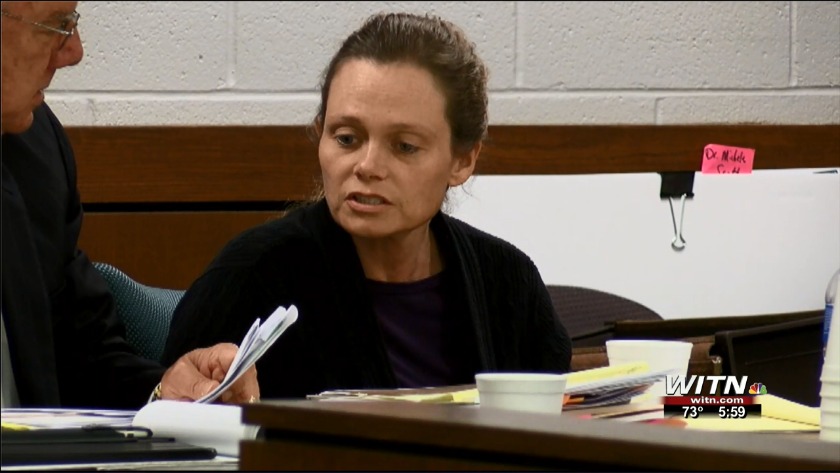 Former deputy sheriff admits to having affair with murder suspect 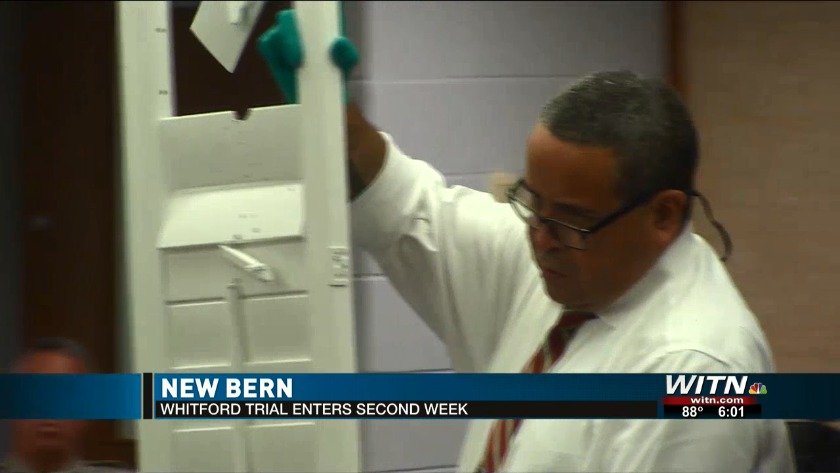 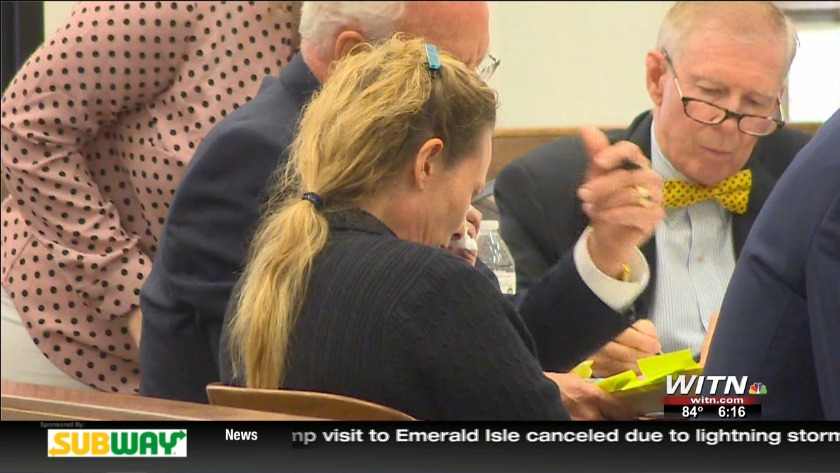 Former courthouse employee on trial for killing her husband

Whitford has been on trial for the past two weeks for the December 2017 shooting death of Jimmy Whitford.

A judge late this afternoon sentenced her to serve between 20 and 25 years in state prison. She must also pay $15,000 in restitution to her husband's family.

Whitford claimed she shot her husband in self-defense. Testimony revealed that the victim called his wife's lover saying he knew they were having an affair before he was shot that night.

Whitford did not take the witness stand during the trial.

The woman worked for 19 years in the Craven County Clerk of Court's Office so a special judge and special prosecutors were brought in for the trial.

During sentencing, the victim's brother asked the judge to give her the toughest punishment possible.

Jurors have started deliberating the fate of a former court clerk who is accused of killing her husband nearly three years ago.

Sharon Whitford is on trial for the murder of Jimmy Whitford back in December 2017. Whitford claimed she shot her husband in self-defense.

Whitford worked for the Clerk of Court's Office for 19 years so a special judge and special prosecutor were brought in for the trial.

Jurors began hearing closing arguments from attorneys at 12:30 p.m. Those were completed around 2:45 p.m.

They could reach one of four possible verdicts. Those are guilty of first degree murder, second degree murder, voluntary manslaughter, or not guilty.

A former lieutenant with the Craven County Sheriff's Office admits he was having an affair with a woman when her husband was murdered.

This is the second week of testimony in the murder trial of Sharon Whitford, a former courthouse employee.

She is accused of killing her husband, Jimmy Whitford, at their home back in December of 2017. Whitford claimed she shot her husband in self-defense.

The state's last witnesses, former Lt. Dan Garden testified his affair with the woman began in September of that year. He told jurors the two communicated daily and had at least five sexual encounters.

Garden said he received two calls the night of the shooting. He testified that the first came from the victim saying he knew Garden was having a relationship with his wife.

Garden didn't participate in the investigation because of the conflict of interest and his employment contract wasn't renewed when Sheriff Chip Hughes took office a year later.

Prosecutors then rested their case against Whitford. The judge denied a defense motion to dismiss the case based on a lack of evidence heard.

Late Wednesday afternoon, Whitford's attorney told the judge that he does not expect the defendant to take the stand in her own defense.

The defense could wrap up its testimony Thursday morning.

The state moved closer to resting its case in the trial of a former Craven County Courthouse employee after calling 3 more witnesses to the stand Tuesday.

Sharon Whitford is facing a murder charge in the shooting death of her husband in 2017.

Three witnesses testified Monday and three more the following day as the state wrapped up its case in Craven County against Sharon Whitford Tuesday afternoon.

The third and final witness called by the state Tuesday was William Kelly. Kelly is an expert in pathology and performed the autopsy on victim Jimmy Whitford.

State prosecutors walked Kelly through his findings with jurors viewing gruesome photos in the process.

According to the state, the testimony is relevant and shows the wounds are consistent with the victim potentially lying in fetal-like position on the floor.

They said a hard surface kept the one bullet from exiting his hip, while also supporting the angle of the bullet that entered both the knee and abdomen. The autopsy information leads the state to determine the shots that killed him were not fired in self-defense, as the defense is alleging in the case.

The state also called a forensic firearm identification expert on Tuesday, who found that at least one bullet was fired from a rifle found at the scene. That bullet was later found in the victim's hip.

The state will continue its case on Wednesday at 9:30 a.m.

Three more witnesses took the stand Monday as the murder trial for a former courthouse employee in Craven County reached its fifth day of testimony.

Sharon Whitford is accused of shooting and killing her husband back in December of 2017.

Monday the state continued to present its case, hoping to wrap it up Tuesday, against the woman who says she was acting in self-defense.

Whitford sat casually in the courtroom throughout the day as those witnesses took the stand.

Marinez was on scene shortly after the shooting took place. He said blood was found in the couple's bedroom, as well as the kitchen, dining area, and laundry room. He also said that there was at least three apparent bullet holes throughout the house upon his arrival.

Marinez was responsible for photographing and collecting evidence, much of which the jury had an opportunity to see, including shell casings from the shots that were fired.

The state also called a forensics scientist from the North Carolina State Crime Lab to the stand on Monday and will continue calling witnesses when the trial resumes Tuesday morning.

New witnesses testified Thursday in the trial of an eastern Carolina woman accused of killing her husband in 2017.

Sharon Whitford, who worked for 19 years in the Craven County Clerk of Courts Office, is accused of killing Jimmy Lee Whitford at their home in Ernul back on December 30th, 2017.

Because of her connection to the court system, a special prosecutor and special judge have been brought in to hear the case.

Thursday the court heard from Sergeant Michael Sawyer, who says he listened to Whitford's claim that she shot her husband inside their home following an aggressive domestic dispute between the couple.

Sawyer testified that he looked at the evidence himself and believes the pellets looked like they were shot from outside the house.

As for injuries Whitford claimed were at the hands of her husband, nurses took the stand, where one discussed how a previous write-up about Whitford's CT scan on her head may have been wrong. Although a previous write-up said there were acute findings from the scan, she says that was a typo and that there were no acute findings, consistent with what a radiologist said.

The defense said they found six typos in one nurse's chart for Whitford. The nurses said they use a dictation system where they talk and it translates into writing and that this naturally happens sometimes.

Whitford was arrested in February of 2018 and released from jail after posting a $100,000 bond.

A former courthouse employee is standing trial for the 2017 murder of her husband.

Sharon Whitford, who worked for 19 years in the Craven County Clerk of Courts Office, is accused of killing Jimmy Lee Whitford at their home in Ernul back on December 30th, 2017.

Because of her connection to the court system, they have brought in a special prosecutor and special judge to hear the case.

Whitford was very emotional, in tears as the 9-1-1 call placed following the shooting was played in the courtroom for the jury.

That call was made by the victim's brother, Brian Whitford, who was the first witness to be called to the stand Tuesday by the state.

the victim's brother testified that his brother called him to tell him he had been shot twice, and he placed the 9-1-1 call as he raced to the couples home.

In opening statements, the prosecution told the jury the murder took place by a skilled hunter, a woman experienced with guns who knew exactly what she was doing.

Whitford's attorney has previously said the suspect suffered several injuries during a domestic dispute that occurred after her husband discovered she was having an affair with a then-lieutenant with the Craven County Sheriff's Office. It was during that aggressive altercation that they say Whitford pulled the trigger in self-defense.

Whitford was arrested in February of 2018 and was released from jail after posting a $100,000 bond.

As a part of the conditions of her bond, she is not to have any contact with the victim's family, in addition to the suspension of her concealed carry permit.

Man gets life in prison without parole for Rocky Mount murder

Former Marine gets prison time for 2013 death of roommate

Man gets life in prison without parole for Rocky Mount murder

Former Marine gets prison time for 2013 death of roommate