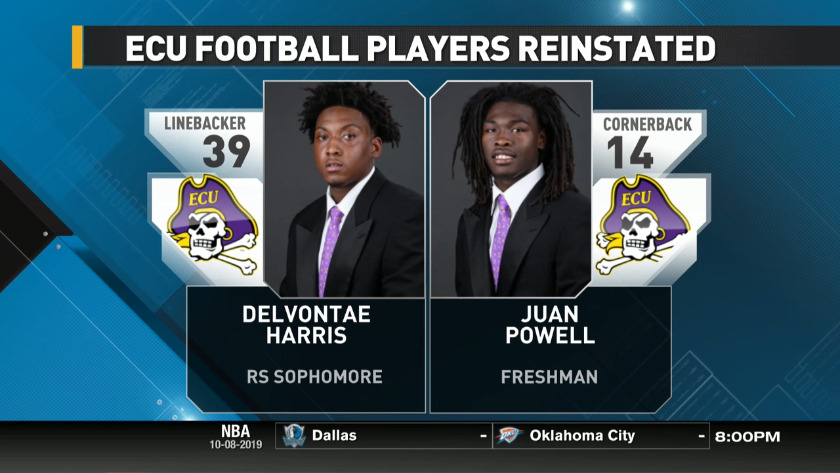 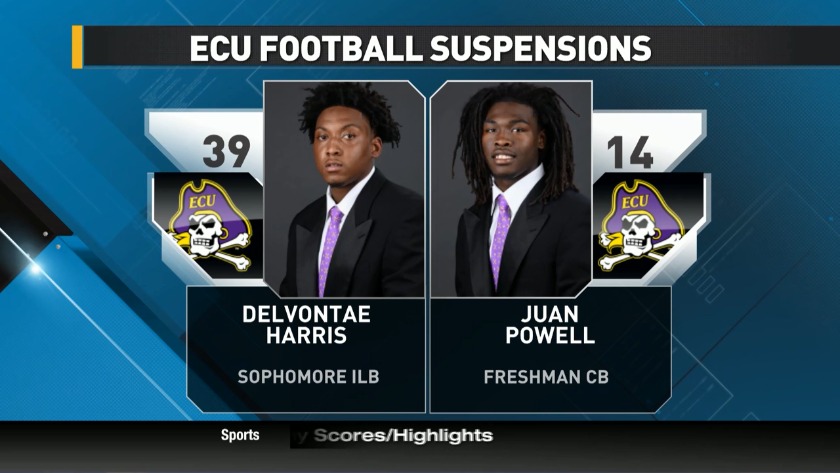 This announcement comes after the sophomore linebacker and freshman cornerback both had their felony charges dropped after being arrested back in August.

The two players returned to the practice field Tuesday morning.

"They are extremely remorseful," said Houston after practice Tuesday. "They are disappointed in the way they represented the program and the university and they are determined to not let this incident define them. If I did not feel that way, they would not be with us. But I do feel like both of them made a mistake. I do believe in second chances as long as I'm convinced the individual will take advantage of the second chance and has become a better person because of it."

Charges have been dropped against two East Carolina University football players who were arrested just days before the season began.

Court records show Juan Powell, 18, and Delvontae Harris, 20, performed community service prior to the felony charges of breaking and entering of a motor vehicle being dismissed on Thursday.

The two were arrested on August 24th after police say they received a call about two men pulling on car door handles and breaking into cars in the area of East 8th and Forbes streets.

Powell and Harris were suspended indefinitely the next day by head coach Mike Houston. There's no word from ECU whether the two will return to the team or not.

Two ECU football players were arrested Saturday morning after admitting to breaking into at least one vehicle.

Greenville police say they received a call around 3:00 a.m. Saturday morning about two males pulling on car door handles and breaking into cars.

Police responded to the area between E. 8th Street and Forbes Street, and found Juan Powell, 18, and Delvontae Harris, 20. The two men were identified by a witness.

Nothing has been reported stolen from any of the vehicles.

Both Powell and Harris have been charged with felony Breaking and Entering of a Motor Vehicle.

According to an announcement Sunday from head coach Mike Houston, both players have been suspended indefinitely from the team.

The decision came after Houston and ECU athletics officials were made aware of the charges filed, and meetings were conducted by Houston and each player.

"As I have stated before, certain things are non-negotiable," Houston said. "Representing East Carolina University in a negative light is something we take very seriously. Delvontae and Juan are suspended indefinitely and any decisions regarding their continued association with our program will not be made until the campus and legal process reaches a conclusion. While I am disappointed with the actions of both players, we will support them throughout this process. Moving forward, our focus is centered on NC State."