MillerCoors sends 200,000 cans of water to those in the path of Florence 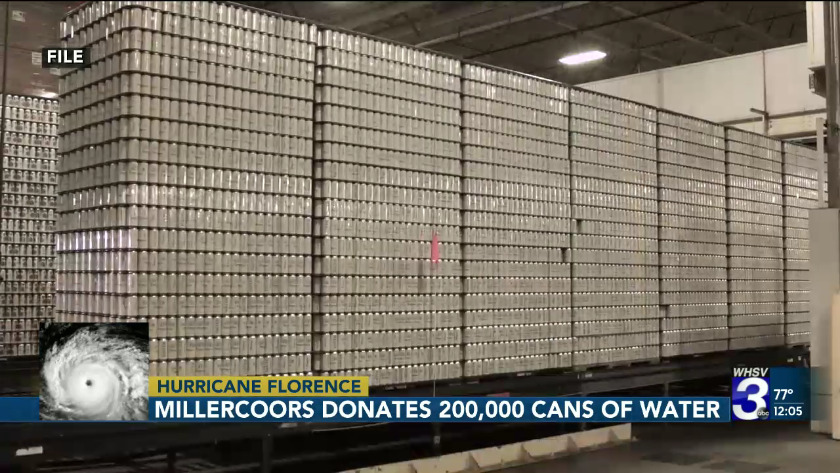 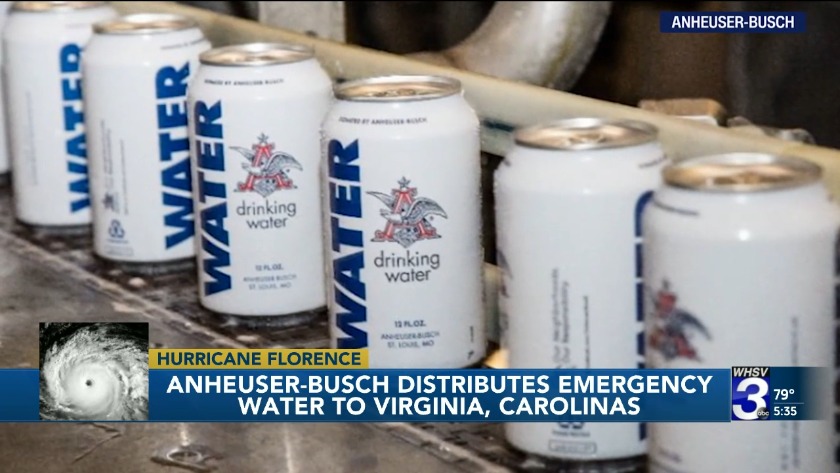 WILMINGTON, N.C. (WHSV) — As Hurricane Florence bears down on North and South Carolina, with its leading edge already flooding barrier islands along the coast, company known primarily for beer is sending a necessity along to those in its path: water.

MillerCoors is donating 200,000 cans of water from its brewery in the Town of Elkton to communities about to be hit by Florence.

The donation is being made in partnership with the American Red Cross and area food banks, and it will be distributed at Red Cross and community shelters.

“We hope this water donation provides some relief and comfort to residents and first responders in Hurricane Florence’s path,” said Karina Diehl, MillerCoors Senior Director for National Community Affairs. “It’s a MillerCoors priority to do our part in helping the communities where our consumers, employees and distributors call home.”

The thousands of cans will come in cases of 12-packs on 80 pallets.

This is not the first time MillerCoors has provided 12-oz. cans of water to communities in crisis though. The program was launched last summer in partnership with Ball, and the two companies have committed to providing over 2,000,000 cans to the Red Cross over a 2-year span.

The water is canned at a MillerCoors brewery in Ohio and then stored in the Shenandoah Valley before being packaged in cartons provided by Graphic Packaging International and sent out.

Florence was downgraded to a Category 2 storm, but categories only describe wind speeds. It's still expected to bring widespread flooding, damage, and power outages throughout the Southeast and then turn north, bringing several inches of rain to the Shenandoah Valley from Sunday through Tuesday, causing localized flooding and power outages due to ground that's already saturated from one of our wettest summers on record.

Read the original version of this article at whsv.com.

Video: Highlights and Scores from 2nd Round of High School Basketball State Playoffs

Many streets under water in Washington, N.C.
Motel evacuated after roof torn off by Florence

Video: Highlights and Scores from 2nd Round of High School Basketball State Playoffs